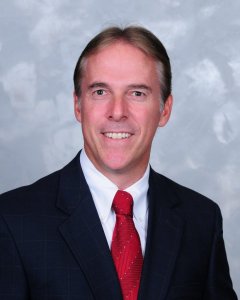 Bill Schirmer, president and CEO of Evansville Teachers Federal Credit Union, was honored by the Indiana Credit Union League as its Professional Achievement Award winner for 2018.

Schirmer is the first recipient from an Evansville-based credit union in the award’s 29-year history. The recognition came at the ICUL’s annual meeting in Indianapolis.

Criteria for the ICUL Professional Achievement Award includes understanding and personifying the credit union philosophy of “people helping people”, promoting the credit union ideal, exhibiting leadership and management ability, possessing an ability to coordinate and work with volunteers and staff, maintaining a record of success in improving the financial fitness of the credit union, being dedicated to the importance of continuing education and training, and successfully developing and expanding services to credit union members.

Schirmer joined ETFCU in April of 2012 after serving as Vice President and CFO of Lake Michigan Credit Union in Grand Rapids. His nomination noted that, since he joined ETFCU, the organization has grown from 68,000 members to more than 202,000 and now operates 15 branches in Indiana, Kentucky and Tennessee, with another five expected to open in those states by mid-2019.

That work earned ETFCU recognition by Forbes as “Best-in-State” among Indiana credit unions, based on the results of an independent survey.

In 2017, ETFCU supported numerous non-profits and awarded ten $5,000 college scholarships to members and children of members. Schirmer chaired the boards at the EVSC Hangers School Clothing Resource bank and Habitat for Humanity of Evansville (which will become the 26th city nationwide to make its 500th house build this year). He championed an organizational campaign to fund a complete house build for Habitat, as well as an employee effort to boost United Way of Southwestern Indiana campaign giving from $12,000 to $45,000 – the largest increase among involved companies. Schirmer also serves as a board member of the EVSC Foundation and Junior Achievement of Southwest Indiana, and serves on the Advisory Council for the University of Southern Indiana.

At the ICUL meetings, ETFCU also received notice for the Dora Maxwell Award for community service for its support of Hangers. Schirmer serves as president of the Hangers board and raises funds for the organization during its annual Celebrity Scoop Night, where he again this year was the top fundraiser.