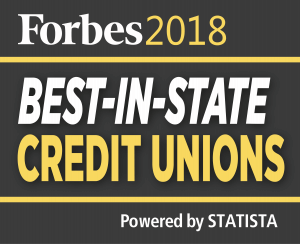 Evansville, IN—Evansville Teachers Federal Credit Union has been acknowledged on the inaugural Forbes list of Best-In-State Banks and Credit Unions released on Thursday. The list ranks financial institutions nationwide based on survey results of overall satisfaction, as well as other areas such as digital services, branch services, and financial advice.

Forbes partnered with market research firm Statista to produce the list, which recognized only 2.4% of U.S. financial institutions. ETFCU was recognized in Indiana as Best-In-State. It is the only locally headquartered bank or credit union on the list.

“We are proud to receive this acknowledgement. The entire Evansville Teachers organization is focused on returning value to our membership in every way we can. We believe this recognition is a testament to our commitment to service excellence for our members,” said Bill Schirmer, ETFCU President and CEO.

ETFCU currently operates 14 full-service retail offices, including six in Evansville. The organization has plans to add seven new offices in the area and throughout the region within the coming year.